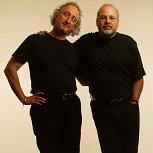 The story of Aztec Two-Step is intertwined with the history of folk/rock music in America. Originating from a chance meeting at an “open mic night” in a Boston folk club in 1971, Rex & Neal’s first four albums on Elektra & RCA Records helped usher the music of the 60’s into the 1970’s and beyond, leaving an indelible mark on the musical genre. As their recording career continued, so did the critical acclaim. In 1986, their album “Living in America” was named in Billboard’s year-end critic’s poll. It also received the New York Music Award for the Best Folk Album.

Also in 2007 their “Live at TCAN” DVD was released, featuring a 35th anniversary concert at The Center for Arts in Natick, Massachusetts, a performance of the self-titled debut album in its entirety, plus other fan-favorites. The DVD also includes interviews with the duo and longtime Aztec Two-Step bassist Fred Holman, as well as comments recorded on the Aztec Two-Step “fan-cam.”