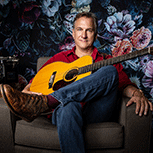 Ellis Paul is a critically acclaimed singer, songwriter, poet and troubadour. He is the recipient of fifteen Boston Music Awards, second only to multi-platinum act Aerosmith. Since launching from Boston, Ellis has built a vast catalog of music, which weds striking poetic imagery and philosophical introspection with hook-laden melodies. He averages 150 shows a year and travels across America and Europe, playing venues from church basements to Carnegie Hall. The Rock and Roll Hall of Fame invited Ellis to pay tribute to his hero Woody Guthrie, who has influenced and inspired Ellis in a profound way.

Ellis Paul is an award winning perfomer of childrens’ music! Ellis continues his tradition of telling socially conscious and riveting stories by making “real music” for children. Inspired by the birth of his own daughter, Paul delivers messages of peace, unity, and a sense of the planet as a unified whole.