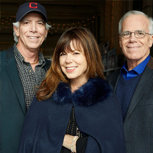 Back in the 1960’s, four brothers who wanted to be The Beatles formed a band called The Cowsills. The original Cowsills consisted of Bill on guitar, Bob on guitar and organ, Barry on bass and John on drums. Early gigs were at school dances and churches around their home in Newport, RI. Eventually, as their harmonic sound was perfected, they got a regular gig on Bannisters Wharf in Newport where they would sing Beatle songs hour after hour. Early recordings were released by the four brothers on Joda and Mercury Records. Barbara (“mini-mom”) joined the group to record The Rain, The Park and Other Things and shortly thereafter 7 year old Susan and brother, Paul, were added to the group. They were signed by MGM records and the group began it’s climb to the top!

The Cowsills enjoyed great success during the late 60’s and in to the very early 70’s not only with their music but appearing as guests on many television shows and even hosting their own TV special. They were approached to do a TV series but the producers had already signed an actress to play the mother on the series so it was a no go for The Cowsills. What was the series? It was The Partridge Family. The Cowsills were also spokespersons for the American Dairy Association and appeared in commercials and print ads for milk. The Cowsills disbanded in the early 1970s but most of them have never really left the music business and various members have regrouped through the years.

I heard sweet voices of Cowsills singing,
Amid the Christmas bells all ringing.
Of families & Christmas joys
For Moms & Dads & Girls & Boys.