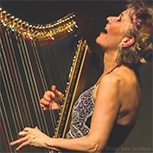 A one-woman orchestra on stage, she layers sounds in real time with electric harp, voice and looper pedal – then weaves solo lines and vocals above it.Forget the demure harpist – forget dozing off in the back row. Henson-Conant is a showman, entertainer, humorist and a solid musician, a pioneer in the world of jazz and an innovator in the world of new instruments – a genre-busting musician who “plays stuff you just wouldn’t think could possibly come from the instrument that St. Peter hands out to new arrivals at the pearly gates.” (Grand Rapids Press)

She’s toured her solo show throughout the US and Europe, and most recently in China. She’s been a featured symphony soloist, performing her original works for electric harp and orchestra with symphonies nationwide including the Boston Pops and National Symphony Orchestra and she’s toured the world as a rock harpist with legendary rock guitarist Steve Vai. She’s opened for Ray Charles at Tanglewood, jammed onstage with Bobby McFerrin and offstage with guitarist Sharon Isbin. She’s been featured on National and international media from Charlie Rose to NBC Today Show including own music special on PBS, “Invention & Alchemy.”